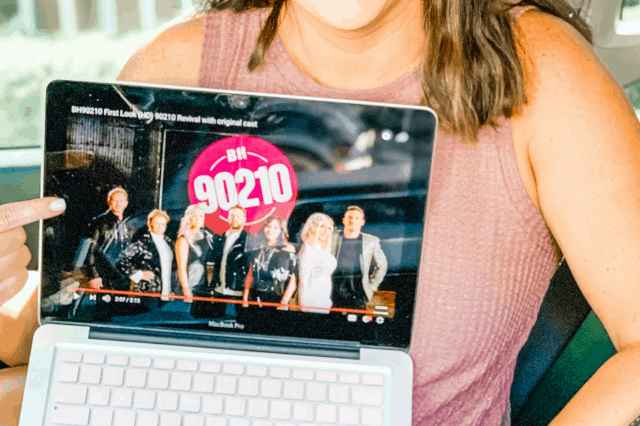 This post is sponsored by SHE Media and FOX

I am here to shout from the rooftops and share that our OG faves- Brandon, Brenda, Kelly, Steve, Donna & David…are back! I don’t know your age, but I do know that you have to remember sitting down at least one time in the summer of the 90’s and enjoying some BH90210. It was a cultural phenomenon for an entire generation!

The OG episodes were amazing, and so much of my teenage life and college years were just like BH90210. I caught up on all the drama just as the series was coming to a close in 2000. I was still in high school at the time, and I saw so much of myself in parts of so many of the characters.

I spent the entire drive for our summer road trips catching up on all the OG memories! Thanks to the hubs for his hot spot, allowing me to stream it from the car.

Moving to a Bigger City

First of all, if you ever made a big move, you probably could relate a lot to Brandon and Brenda Walsh. They made a big move from Minneapolis, Minnesota to Beverly Hills. The cool thing about BH90210 is that it addressed a lot of cultural issues during that time, but did it in a cool way!

Teen Idols of My Time

While current teenage girls have their crushes, in the late 1990s, the teen idol was Jason Priestley. I could have watched him alllll day. This is probably what else made the original so popular.

Some of the teen idols that were so popular during the OG cast were Jennie Garth, Tori Spelling, and Brian Austin Green.

After the original show ended, I remember carrying my love for this show into my adulthood. There have always been tons of references to the show. I think it was one of the shows that made a huge difference in television. Many of us learned a lot watching BH90210.

Today’s television has a lot of drama, but nothing compares to the drama that BH90210 has brought to the screen. I can’t wait to see what they bring when the gang gets back together.

Bringing the OG Crew Back

I get super excited when I think about the cast returning, it’s exciting. When this amazing show consumed so much of your teenage years, it’s exciting to know that it’s returning.

In 2019, it was announced that the reboot would premier on August 7, 2019, at 9/8c on FOX! There is a 6 episode reboot happening, and you better believe I’ll be sitting there with my popcorn, savoring every single moment. I cannot wait to see what will happen when first loves, old romances, friends, and frenemies come back together at the Peach Pit. Psst- The Peach Pit is opening as real-life pop-up eatery for fans to stop by and enjoy. I’ll take a Mega burger sub veggie, hold the bacon and extra cheese, please!

What You Need to Prepare for the new BH90210

Snacks – You cannot watch this new reboot without having your snacks! I’m going to be eating my favorite 90s snacks. Bugles and Fruit by the Foot were quite popular during the 90s in my house.

Hair & Makeup – I can’t wait to dive back into hairstyles from the 90s! I will be busting out my newly purchased deep waver, scrunchies & I might even do my makeup with that retro look, I think it’ll be fun.

Friends and Family – Watching BH90210 wouldn’t be the same without my friends and family there! It’s going to be an exciting night.

Commercial Break Ideas– Play Mash, do the Macarena, jam to some BSB or N’SYNC.

So tell me, what is nostalgic from this time that is making you walk down memory lane? What are you excited for?